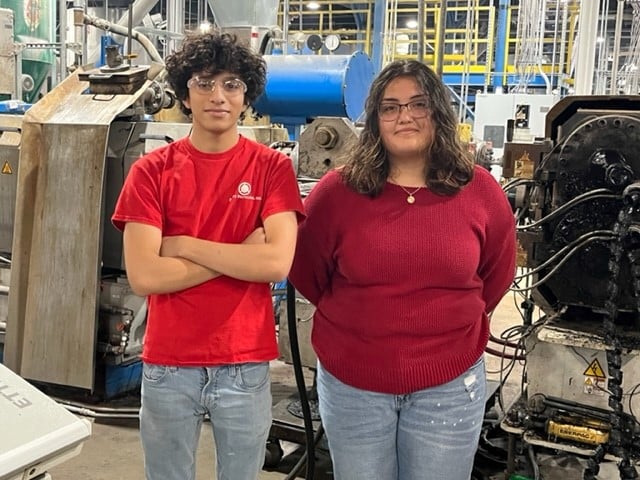 When Plastic Recycling Inc. signed on with the Modern Apprenticeship Program (MAP), it hoped to fill workforce gaps. When Cristina Llamas and Danny Bonilla signed up to be apprentices, they hoped to get some real-world workplace experience.

Just a few months into the program, everyone involved says they’re getting everything they hoped for, and more.

For Plastic Recycling, that “and more” is what might be the greatest benefit: The apprentices bring a special energy, new ideas and unique technology skills with them to work every day.

“These kids are just so mature,” said Plastic Recycling Chief Personnel Officer Chad Smith. “They just come in and get things done.”

Designed to give young people hands-on career training, MAP collaborates with employers to place high school students in paid positions that give them skills, experience and, in most cases, certifications that will help them start a career when they graduate or continue for post-secondary attainment. MAP participants who do go on to more schooling often do so with a year of college credits in hand.

Each MAP experience is designed as a three-year commitment, with students working about 10 to 15 hours a week their junior year and up to 20 hours their senior year, with an option to go full time after they graduate.

For Cristina and Danny, MAP has allowed them to work at Plastic Recycling’s westside Indianapolis plant, which converts plastic waste into raw materials used by a range of businesses. While the two high school juniors work in different roles, they describe similar benefits from the experience.

Cristina knew she was interested in business, but she didn’t have a good sense of what specific career area to pursue. Urged by a friend to check into apprenticeships, she read the job description for a human resources position at Plastic Recycling and felt that she could see herself in the role, and that a career in human resources could be meaningful.

Once at the Plastic Recycling’s facility, the Ben Davis High School student was won over by the welcoming staff. “I expected them to shoo me off, because I’m a young person,” she said. “But they were very accepting.”

Also eye-opening was how much the firm has included Cristina in everything the HR team does, which has been especially educational, she says. For example, she has been involved in many real-world HR scenarios such as sitting in on interviews for a new plant manager. Some of her favorite moments on the job come when she simply walks the floor of the facility and talks to other employees.

“We’re very diverse here, so you see people from all walks of like,” she said. “That really brings me joy.”

As an extrusion operator, Danny, a Pike High School student, is getting to do the kinds of hands-on work he loves. Like Cristina, he was impressed by how quickly other workers accepted him, and by how eager they are to teach him the ropes.

“They have so much knowledge, and they learn to pass it on to you,” he said.

Danny first learned about the MAP program through a postcard he received last year, and he saw it as a good opportunity to get a sense of what he might want to do with his future. “I just knew I wanted to do something hands-on,” he said. “Now I know this is what I want to be.”

Like Cristina, Danny attends school for a half day each weekday and works a half day at Plastic Recycling. Some of his peers were surprised to learn he would be dividing his day this way, and he says the days do feel pretty packed, but he enjoys what he’s doing and feels he’s learning something new every day.

As much as Danny and Cristina are getting out of their apprenticeships, they aren’t the only ones benefiting, says Plastic Recycling’s Smith. The firm sees it as a great experience as well, appreciating a couple more pairs of hands to help with the workload, but also the energy the high schoolers bring to the workplace.

Plus, Danny and Cristina each bring tangible skills to the organization. For example, as a digital native, Danny is a quick learner who has helped shop veterans learn about newer equipment, Chad says, and, as a Spanish speaker, Cristina has been able to serve as a translator between the company and some of its employees.

All of these plusses have left Plastic Recycling with such a good feeling about MAP that it plans to expand its participation, adding apprentices in both the front office and production roles.

The Modern Apprenticeship Program was developed by EmployIndy and Ascend Indiana. Conexus Indiana partners with MAP to help prepare young talent for careers in advanced manufacturing and logistics. Learn more.