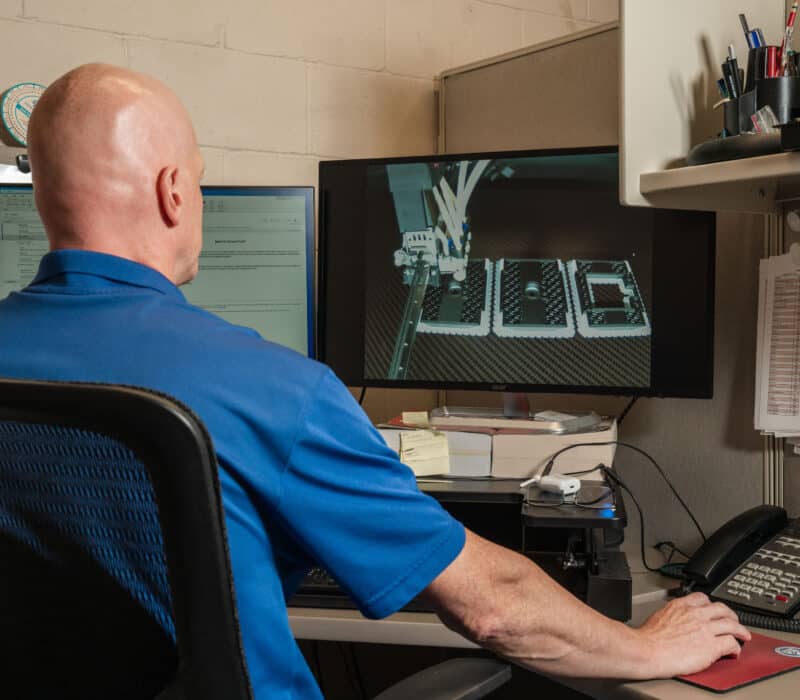 With more than 30 years of experience creating automation solutions for other manufacturers, A&A Custom Automation is no stranger to the benefits of Smart Manufacturing & Industry 4.0.

A&A Custom Automation designs and produces custom machines and components for industries including automotive, mining, construction, military, plastics and consumer products, with many global corporations among them. A&A was born in Evansville, Indiana, in 1989, and is now owned solely by Kristie Chinn, with President Brad Herrell and Operations Manager Sam Conrad at the helm. Brad describes the company “as a machine builder that does integration work,” he explained. “If a customer just needs a robot and some controls, we can absolutely do that. But if they need something more elaborate to fixture the parts to, we can design and build that automated process. We specialize in building full-blown automated lines and custom machines, which can be completely or semi-autonomous.”

Efficient design and production of automated solutions for its customers requires A&A to be intentional in investments in its own automation. “We have many subtractive manufacturing processes in our facility,” Brad said. “But because the work we do is usually one-off in nature, we can’t automate every step of our processes by any stretch.” While a large factory often has the benefit of making tens of thousands of units in a single production run, A&A often builds just one or two instances of a machine or component. These highly individualized jobs make customization technologies most attractive as A&A’s design and manufacturing processes must remain responsive to its customers’ projects. 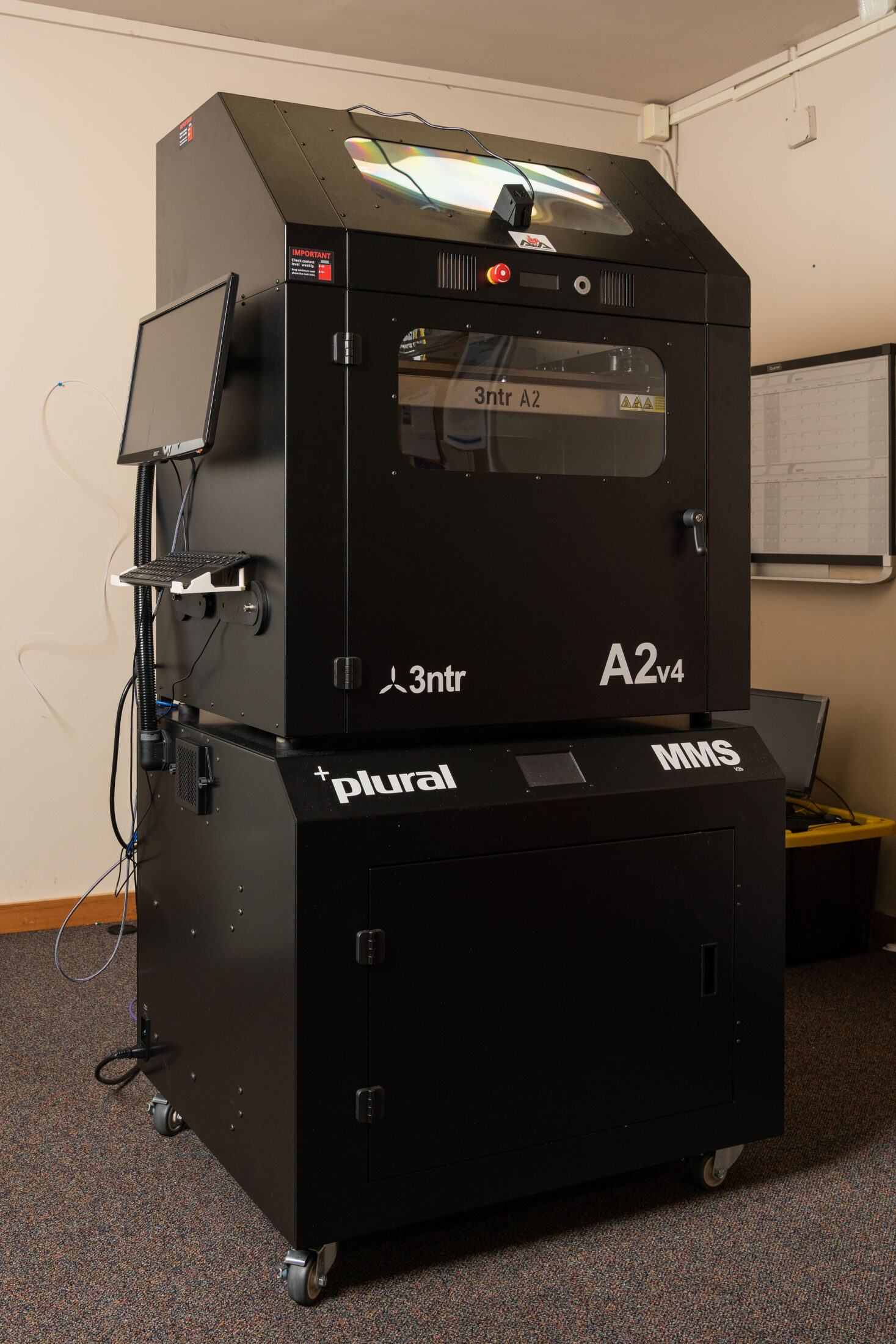 A&A invests in 3D printing for production parts to streamline its manufacturing processes–saving time and money for its customers and bottom line.

A&A has predominately been a subtractive manufacturer. Its engineers design parts and send detailed drawings out to its machine and fabrication shop, where a wide array of inventoried and non-inventoried materials are accessed or purchased for fabrication. Many of those parts must then be sent out to an external vendor for post-processing (i.e., powder coating or nickel plating).

Brad knew this process could be optimized and that “A&A could save a lot of time and effort if we were able to cut out some of those steps.” For many years Brad had been looking into the adoption of additive manufacturing but found the biggest drawback to be that 3D printers primarily use plastic as the filament. While most of A&A’s machines are built with heavy-duty steel components for longevity and performance benefits, Brad knew not every part needed the durability of steel. The example Brad gave is “the hundreds of sensor mounts that are machined and used which are not directly impacting the production of the part.”

Investing in an industrial 3D printer would eliminate many of the bottlenecks in its subtractive manufacturing process. “There would be no raw material purchase order,” Brad continued. “No receiving the material and all the other administrative work. No longer following the scheduling process, setting up the mill and programming the CNC machines. The post-processing step would also be eliminated because if the part is made of plastic, we don’t need to paint it, anodize it, black oxide or nickel plate it.” With the help of the Manufacturing Readiness Grants program, A&A could quickly procure an industrial 3D printer to begin printing various production parts while maintaining its manufacturing flexibility and responsiveness to custom projects. 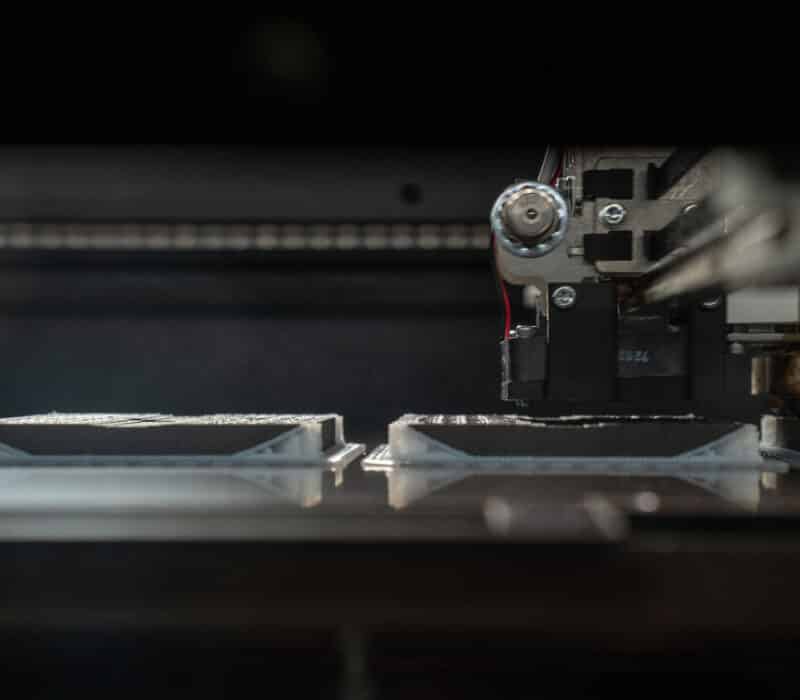 “The owner of A&A had some hesitations,” Brad recalls. “But we showed her how strong the parts were and the processes that would be streamlined or eliminated and the resulting cost savings. She immediately came around to it and said, ‘Go out, get some pricing.’ Starting with the easy parts, or as Brad called it, the low-hanging fruit was an important aspect of adoption. “We started with the sensor mounts, the guards, the things where strength and longevity weren’t too big an issue,” he said. “That would be an easier job to get our tool makers and designers to accept,” Brad explained,

There were some cultural aspects of the project to overcome, he admitted. It was a case of ‘We’ve always done it this way’ and we needed to show the team in our machine shop that the additive manufacturing process would produce the quality that is familiar to them. “To be successful, you keep your workforce involved in the project because they have the knowledge of whether this technology is really going to be right for us,” Brad believes.

Find an experienced employee to champion the technology adoption project.

To demonstrate the potential of the new 3D printing equipment, A&A tapped one of its long-term mechanical engineers who is a machine designer with a 4-year Purdue degree and some 20 years of experience with A&A. “Before we actually ordered the machine, we let him have some say about what we were choosing to produce on the machine,” Brad said. “He did not have experience in the 3D world, but he has a ton of experience in building machines, designing parts, detailing parts, and so on. We chose him to champion this project.”

After the machine was selected and ordered, the engineer went through the potential use cases on the drawing board and nominated some components for the additive process that would normally be built in the machine shop. He also collaborated with A&A’s lead designers to make sure that the department was comfortable with switching those parts to an additive process, explaining that the printed parts would not sacrifice any strength or quality specs.

“So, now we have 3D printed parts now ready to go onto our first machines,” Brad said. “The machines aren’t built yet and haven’t been trialed and debugged yet. But the process has worked extremely well.” Any concern among employees has abated, Brad said. “Most think this is a great idea and there’s wide-scale acceptance, with only some ‘Well, we’ll see about that’.”

“We’ve already talked to our customers about it,” Brad acknowledged. “We showed examples and samples of sheet metal guards versus the plastic guards to some of our key customers. We showed them examples of a couple of sensor brackets we had made of aluminum and will now make of chopped carbon fiber-filled nylon, and they were open to it and excited about it.” They also were impressed by the potential of cost savings being passed on to them, as well as the fact that some of the parts are easier to handle and not as bulky.

Brad also mentioned, “Machine shop rates vary anywhere from $80 to $110 an hour. When we can take that time out of an automation proposal, we can have a nice impact on the overall cost of the machine and become more competitive.” While the company doesn’t have finalized numbers yet as to what they’ve saved in time and money, Brad said, “We do have some pretty good ideas. In particular, we are gaining huge efficiencies where the 3D printer can produce a part in one piece, rather than two separate pieces that would need to be welded together. Also eliminating the post-processing step for several parts has been a big win for us.”

Leverage a technology adoption roadmap to guide investments in automation.

“A technology roadmap can be a term associated with more work, but it does really help to have one in place, especially when it comes to choosing the right equipment and the right vendor. You need to be methodical,” Brad recommends. “Instead of just deciding ‘we can print some of these parts, so let’s go get a plastic 3D printer,’ you need to go through a methodical process. We looked at how many parts we have, and which ones are the best candidates, and what materials we should work with. We looked at different machines and worked with our lead designer to help choose those parts. We actually put together a spreadsheet so we can track the parts that we converted from the CNC process to the additive process.”

Brad also highlighted that the spreadsheet will track estimated costs against actual costs and prove the ROI. The results will be the determining factor in deciding to move on to the next frontier at A&A and into tooling or metal 3D printing. “I was thrilled when Conexus Indiana and the Indiana Economic Development Corporation approved our grant. I think we can say that this first project has been a success, and now we’re looking at our next step in this smart manufacturing journey,” Brad said. “We’re looking into ways to tackle different sets of production parts while the program is available.”