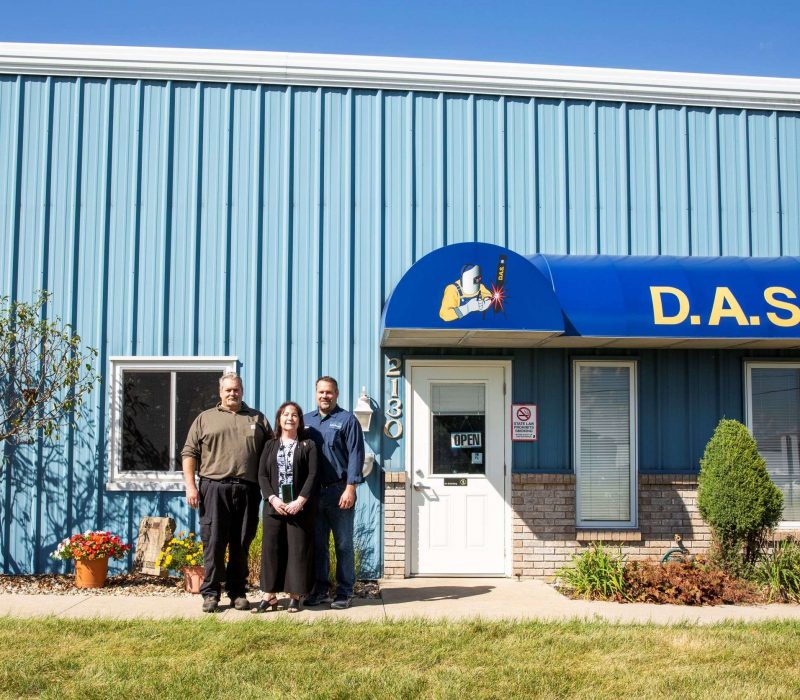 D.A.S. Services is a custom job shop providing hydraulic and pneumatic services relating to cylinders (new and rebuild), custom machined parts and presses (horizontal and vertical). D.A.S. also supplies components for cylinders and presses such as glands and seal kits. The company has extended it shop capabilities to customer sites for a truly tailor-made solution.

David A. Short founded D.A.S. Services in 1992 as a portable welding and fabrication shop based in his home garage. Three years later, Kevin Bussard joined as a partner. Soon after, David married his wife, Barbara, and she, too, joined the company. Almost 30 years later, the three have grown D.A.S. Services into a machining job shop with some 25 employees in a 20,000- square-foot facility located in Angola in Northern Indiana. The company fosters a family atmosphere in the business, with employee tenure averaging more than a decade.

The partners continue to serve as D.A.S. leadership with David as president and chief operating officer, Kevin as assistant vice president and director of sales, and Barbara as vice president and chief financial officer. Barbara points to D.A.S. as “truly an example of the American dream. It was definitely a rough ride with not having any money and dealing with setbacks like 9/11, automotive bankruptcies, and recessions along the way. But we survived it all, and we’re thriving.”

D.A.S. now provides an array of services specializing in hydraulic and pneumatic presses, including custom machining for press repair and manufacturing, both within their shop and off-site via fully equipped mobile capabilities that takes the services to the customer’s location. Their expertise in hydraulic and pneumatic presses has advanced to a point where they commonly build brand-new presses from scratch. Plant Supervisor Todd Crank explains that work as primarily on presses employing a compression process. “The press has a big cylinder that runs the platen up and down with a mold in place. Material is injected into the mold and as it is heated the material flows into the extremities of the mold.” 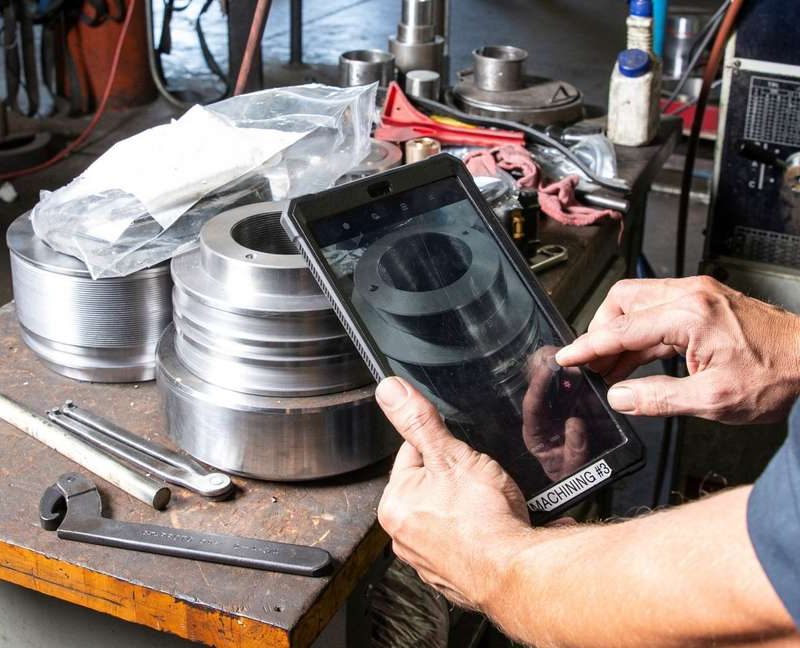 D.A.S. applied for a Manufacturing Readiness Grant to implement Traverse Global, an enterprise resource planning (ERP) system tailored especially for service repair manufacturers, to allow them to digitize their manufacturing workflow and extend its connectivity to the field. It is a digital transformation project, which affects the entirety of the company’s operation and production processes. The decision to move forward was the culmination of intensive study conducted primarily by Barbara and Todd. “Todd and I worked on this for years, and kept it under wraps,” Barbara explained. “We went to a different site for training; we did a lot of webinar training; we did a lot of extensive research. It took a long time.” They understood that if adopted, the project would integrate with every process and every employee in the company, so leadership understood the importance of introducing it only when they were certain it would improve all aspects of the business and the company culture.

D.A.S. was one of the first two companies to implement the Traverse Global software for service repair shops. The fully automated system documents every aspect of a repair project and works from both desktop computers and tablets, enabling employees working off-site to take advantage of the documentation features. The system captures the details of a job, from the time an employee began working on the job and what function that employee was providing from tear down to parts acquisition, rebuilding, testing and through delivery of the completed job to the customer. The Traverse software uses Windows OneNote to append special instructions to the project record.

Phase one introduces the mobile tablets for digitizing and documenting repair work. Tablets throughout the shop floor provide convenient access for all employees, and each tablet is equipped with a camera to provide photographs as the project proceeds. Keeping track of what’s happened, and when and by whom increases efficiency by creating a record accessible by each individual working on the project from start to finish. The tablets also provide electronic delivery receipts—a feature that some 80 percent of D.A.S. customers appreciate (D.A.S. continues to provide paper receipts for the few customers who prefer them). While the mobile technology allows easier and more convenient communication with customers, Barbara explained that it does not allow customers to directly access the information through their own computers.

Digitally integrated product inspections are the next phase of the technology adoption agenda. The repair inspections will provide flow charts and checklists to ensure employees complete all the steps on each job and any special requirements for the job. Because D.A.S. is known for its quick project turnaround, the inspection piece will reinforce the company’s ability to maintain and build upon its efficiency reputation.

The last phase in its technology adoption project is a real-time inventory management system. Currently the company uses a quarterly inventory process but maintaining inventory records in real-time via tablets enables a more efficient and effective system for rapid repair work. With access to real-time inventory data, the D.A.S. employees are able to better estimate the turnaround, costs, and price of a repair project. 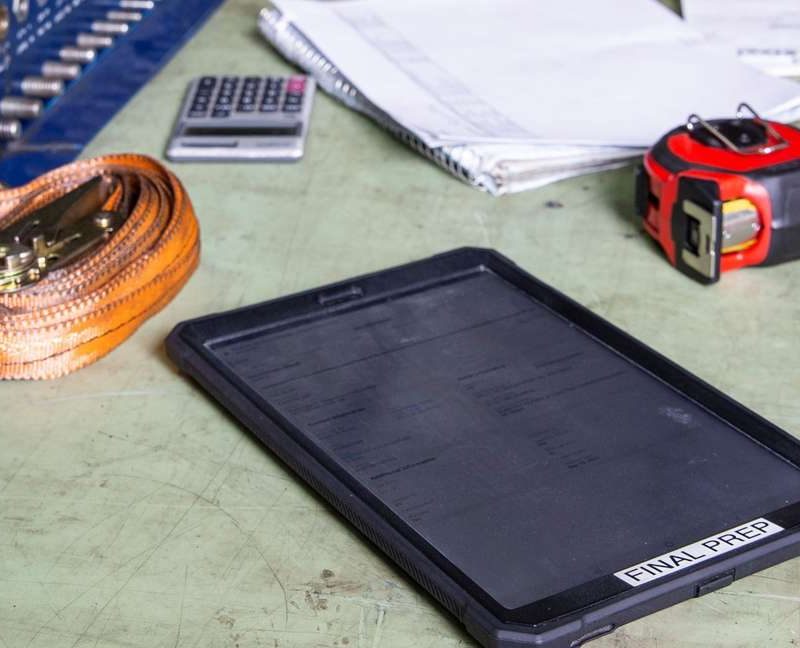 With the first three phases of the project implemented or in active development, D.A.S. leadership has become increasingly aware of the opportunities to digitize and improve other manufacturing and repair operations. Next steps in the company’s technology journey are starting to become clear and well-defined. While leadership doesn’t want to shock or overwhelm employees by rushing technology adoption, they are seeing new possibilities that need to be explored. For example, the company has many returning customers, and technology could incorporate predictive maintenance for those customers.

It’s wise to keep front-of-mind the time it takes to launch a project—not just the time spent in research, but the time required to train staff on the new systems and hardware. While the time Barbara and Todd invested in research was worthwhile, there were still surprises, such as the cost of upgrading the company’s data infrastructure. WiFi routers, local servers and other requirements to complete the project added to the originally anticipated cost of the project. Delays, too, are to be expected. In the case of the D.A.S. project, the vendor experienced delays during the roll-out and, as a result, the schedule was neither as fast nor as accurate as anticipated.

The project was budgeted at $72,000, which may not seem huge to a larger corporation that may invest of hundreds of thousands of dollars in an ERP system, but for a small company such as D.A.S. it was a significant budget item. Securing a Manufacturing Readiness Grant was a considerable advantage and adoption incentive for D.A.S.

As happens at most companies when new processes are introduced, there was a certain amount of culture shock for the D.A.S. team during the initial project implementation. And, as at so many companies, the younger, computer-savvy employees were initially the most accepting and excited about the new technology.

While there was some initial trepidation among the team, the entire staff adapted smoothly and now appreciate the flexibility the tablets and software offer. The camera process alone has been a time- and effort-saver for them. Before the tablets, employees had to walk away from their workspace and grab a camera, take photographs and then again leave their workspace to upload the photos to a desktop for record keeping. Plant Superintendent Todd Crank, who has been at D.A.S. since 2003, was used to paper documentation, but like other more senior employees he has embraced the new system whole-heartedly. 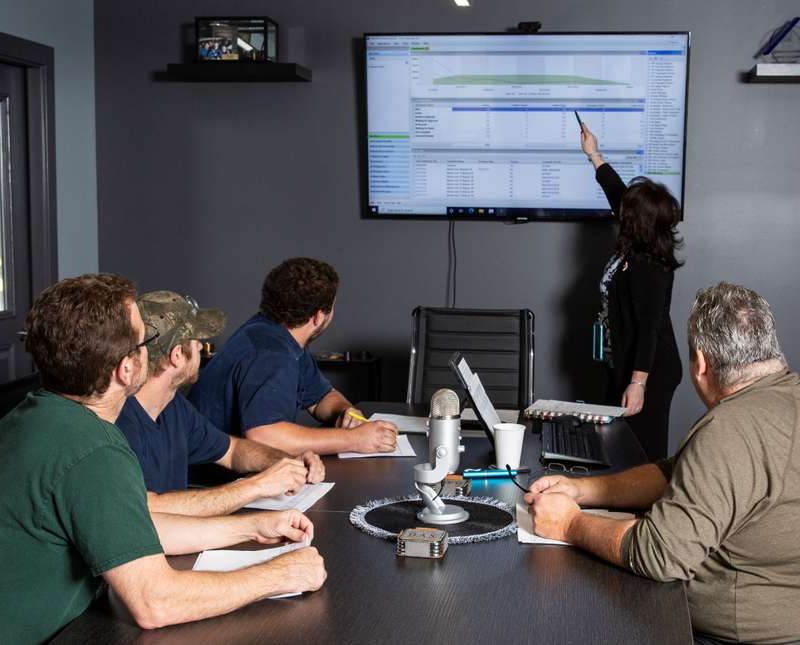 Customers Appreciate the Digital Receipts and Rapid, Electronic Cost Estimates – the Investment Is Already Paying Off for D.A.S.

The new technology is still in its infancy at D.A.S., but its benefits are already making themselves clear. The digital receipts and delivery, for instance, have been a big hit with customers, most of whom appreciate the ability to eliminate one more piece of paper in their own systems. The system also generates cost estimates that can be sent electronically to customers, saving time and expense for both D.A.S. and its customers.

From the D.A.S. point of view, the ability to look back at both active and closed jobs to document and understand what went smoothly and what processes need tweaking going forward is a real benefit. The system also provides more inventory control even before the full implementation of the inventory system has completed, providing a glimpse of other benefits that may be possible in future implementation phases.

While many small companies may be concerned about the initial capital investment to introduce new technology like the one D.A.S. chose, the return on investment can be justified and quickly materialize. As Barbara said, “I’ll be quite honest with you, we also expanded our facility last year. So, we’re trying to launch the system, finish construction, and move in. To us, certainly, $72,000 is a lot of money, but with the readiness grant, this type of thing is not outside of the realm for the small manufacturers to consider doing.”