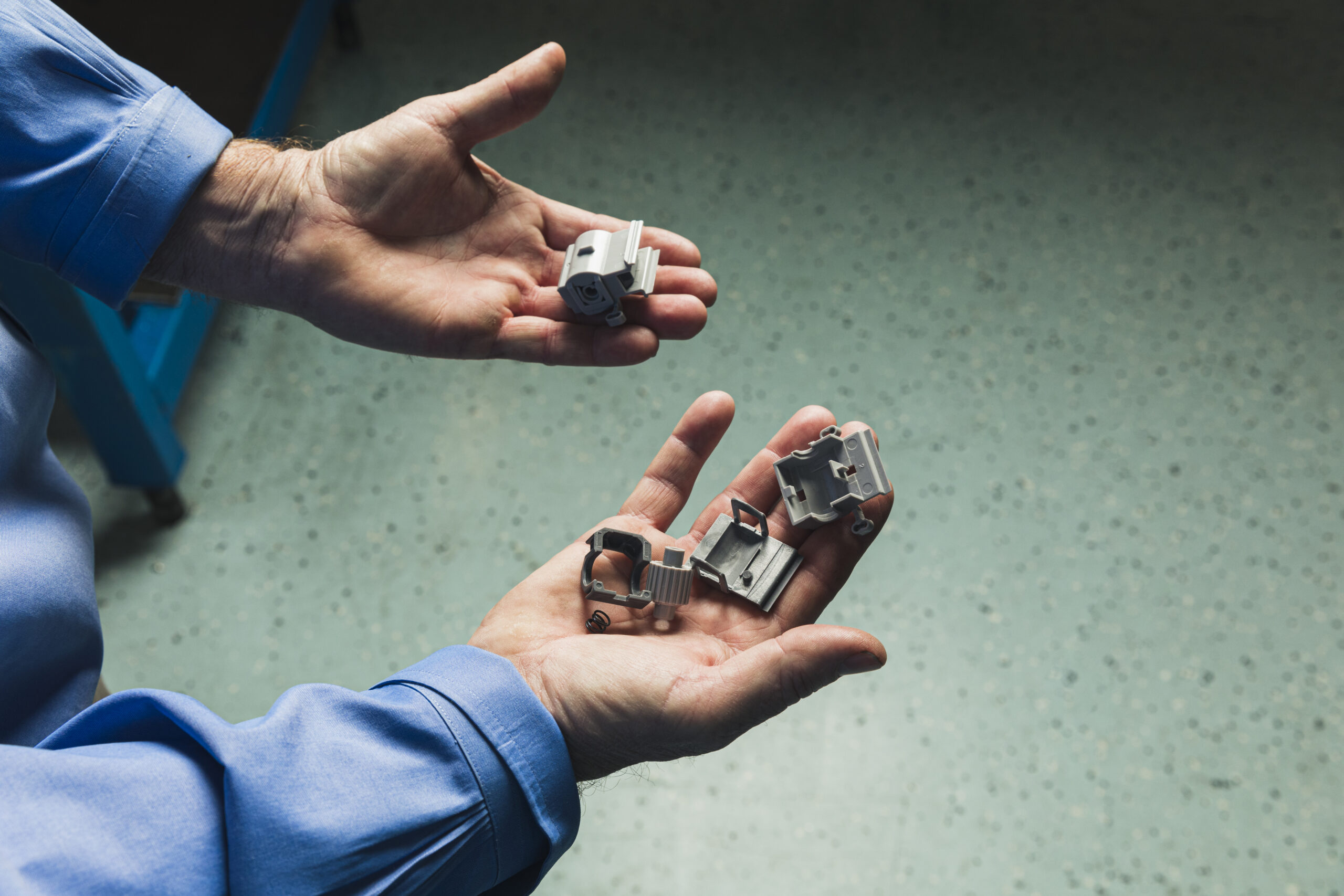 From humble Midwest beginnings and naming itself after the Metro bus stop outside the front door, Metro Plastics grew into a tech-savvy manufacturing company.

Metro Plastics President Ken Hahn remembers when his father started the business in a small building in downtown Indianapolis in 1975 and named it for the Metro bus stop just outside the only entrance to the building. The entrepreneur timed his deliveries around the bus schedule and adopted the name for his new company. That was just about the time mood rings and pet rocks became must-have fads. Free-spirited consumers embraced the two crazes and Metro Plastics used that enthusiasm to make the plastic stones and hearts essential to those products. “That gave my father quite a shot in the arm,” Ken explained. He built the molds, and they were painted directly after molding and delivered straight to the Jewelers.

By 1981 the company had grown and moved to a building in the northeast suburb of Noblesville. More recently, “We stayed in this community and built a new facility three years ago,” Ken said. “That’s made us a lot more efficient and a lot more attractive to employees.” As the company grew its customer base, it began producing more complex parts and components, as well as eventually taking on some of the part assembly process.

Metro Plastics’ client base is much more diverse and sophisticated today, with medical, automotive and consumer electronics among the industries it serves.

“The one thing that hasn’t changed is plastics,” Ken said. “It’s injection molding of thermoplastic and tooling the molds, of course.”  Metro now builds most of its molds in-house and uses several conventional injection-molding processes to create its clients’ products. More recently, however, some clients are requiring value-added assembly, and labor costs can make it difficult for American-made products to compete with other countries. Ken described how the company’s experience with one client in particular—a research and design company in another state—led to this technology adoption project. 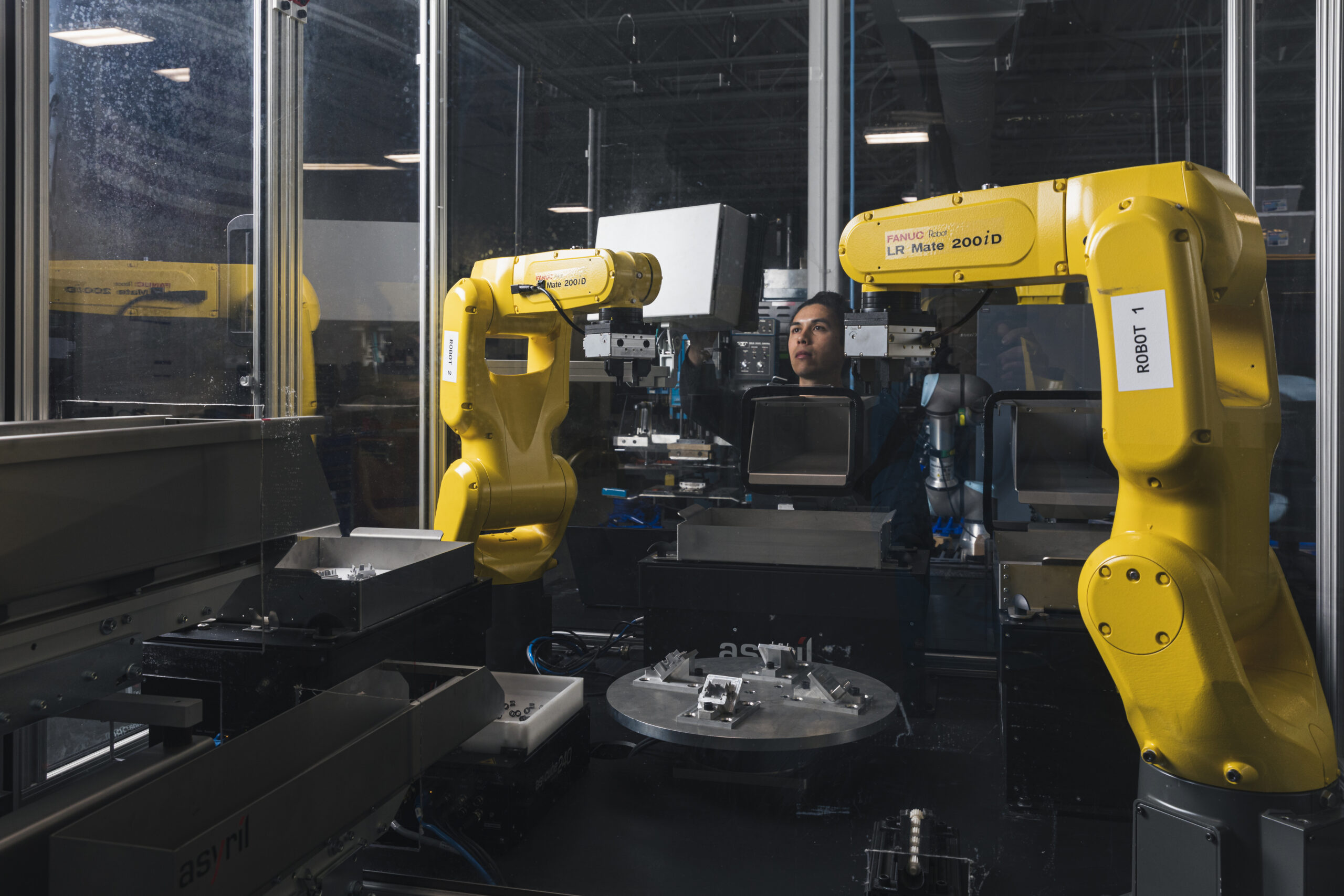 When the customer’s in-house molding division decided not to take on the new manufacturing process, Ken assured the client that Metro Plastics would undertake the project. In essence, the process is about taking a few injection-molded pieces and then nesting them together in a value-added assembly process for the client. This job, though, is very labor intensive. “So, as the work continues to ramp up, we’re doing these things by hand, and that’s almost packing money in every box,” he said. The choice was clear: either automate the assembly process or raise the price.

Metro employees used a programmable cobot and parts built with its 3D printer to test robot dexterity to complete the assembly process step-by-step-by-step, using the cobot arm and gripper. The flexible cobot prototyped the process before the company invested in the dedicated robot cell for high-volume, high-speed assembly. Fanuc brand robots were purchased for the actual process automation. Because the Fanuc robots are up to 10 times faster than a cobot, Metro Plastics could further increase capacity and reduce labor costs.

“We use the 3D printer every day to print prototype parts, and cobots help prototype processes,” Ken explained. 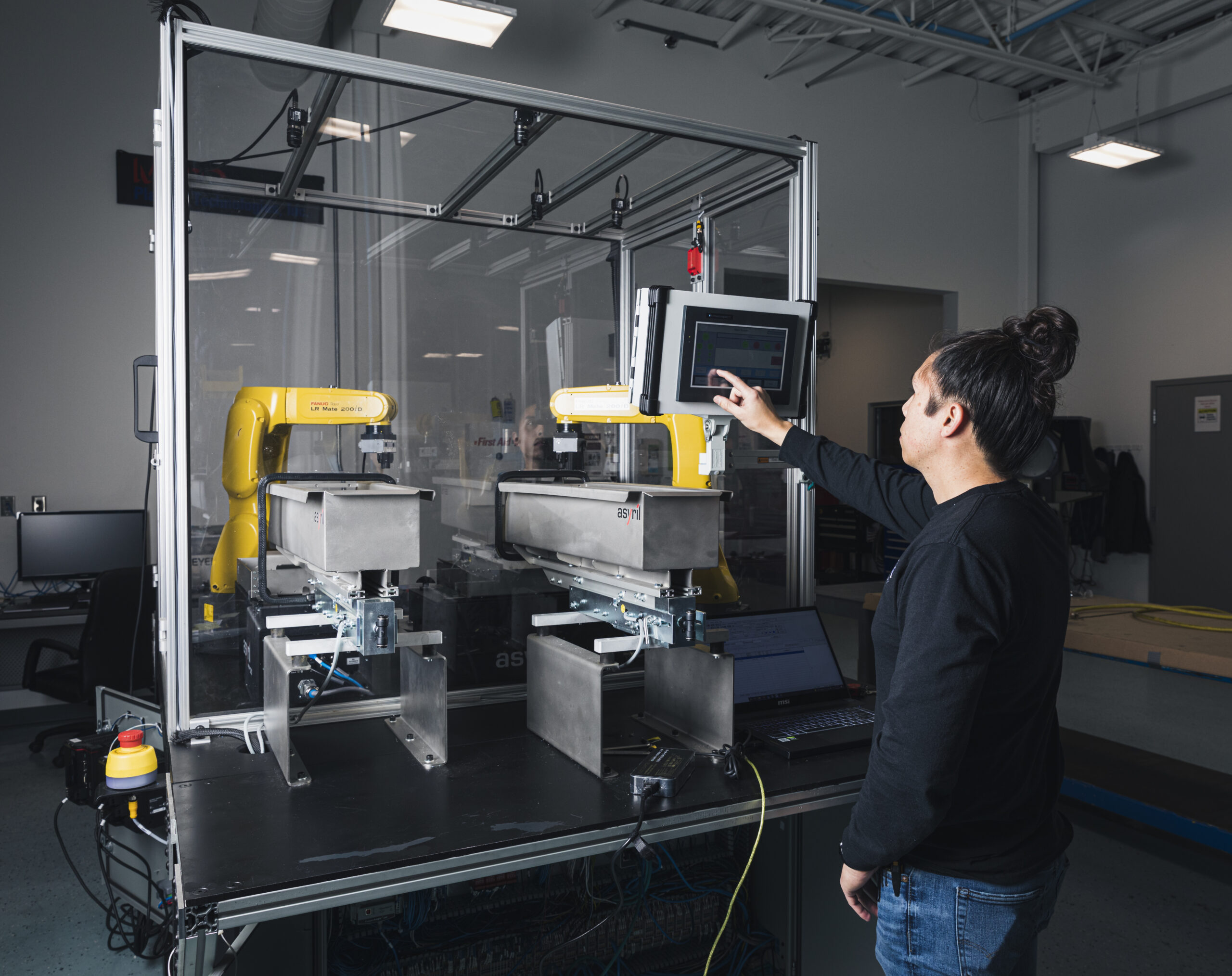 Automation and robotics are helping to elevate the existing workforce into higher-skilled, higher-paying jobs.

Metro Plastics now has 26 robots tending to and working with its injection-molding machines. “We are really at the point where we want to get some of our current workforce that’s doing manual work to Ivy Tech and get them the skills to gain higher-paying, active living-wage types of jobs,” Ken shared. “There’s a shortage of workforce, obviously. We generally get the best talent in our industry because of the advanced nature of our manufacturing facility and just the culture here.”

Upskilling employees and investing in automation is a key piece to remain competitive globally. “We can’t be adding more and more labor at the cost of living in Hamilton County,” he explained. “We have been lucky to participate in some conversations with the folks from Ivy Tech about what is needed at our Noblesville facility.” He toured the Ivy Tech Indianapolis training facility and was impressed with what he found. “I would literally think it was my shop,” he marveled. “The same equipment, same everything.” He believes that adds to the Metro Plastics employees’ comfort in making the commitment to enroll in ongoing education. The company also offers tuition reimbursement, and helps employees with training grants that are fully refundable. In addition to Ivy Tech, the company builds its talent pipeline by leveraging internships with students from Noblesville High School and Purdue University.

Ken encourages other manufacturers to consider the MRG program, recommending the process from application through reimbursement. “I’ve been though some other processes and this was probably the most user-friendly,” he said. “I’ve been through some that were so complicated we actually had to hire a facilitator.” Conexus staff “reached out and helped us navigate it and that, I think, is a very important part.”

Ken summed up his experience: “From my perspective, Indiana is one of the best manufacturing states in the country. We have to be competitive in a global environment, but the opportunities are here. The resources to get people trained with Ivy Tech and training grants are here. The technology is here. And Metro Plastics is at a point where we can do this, we have enough pieces of the puzzle. It’s just a matter of getting them to work synergistically together.”