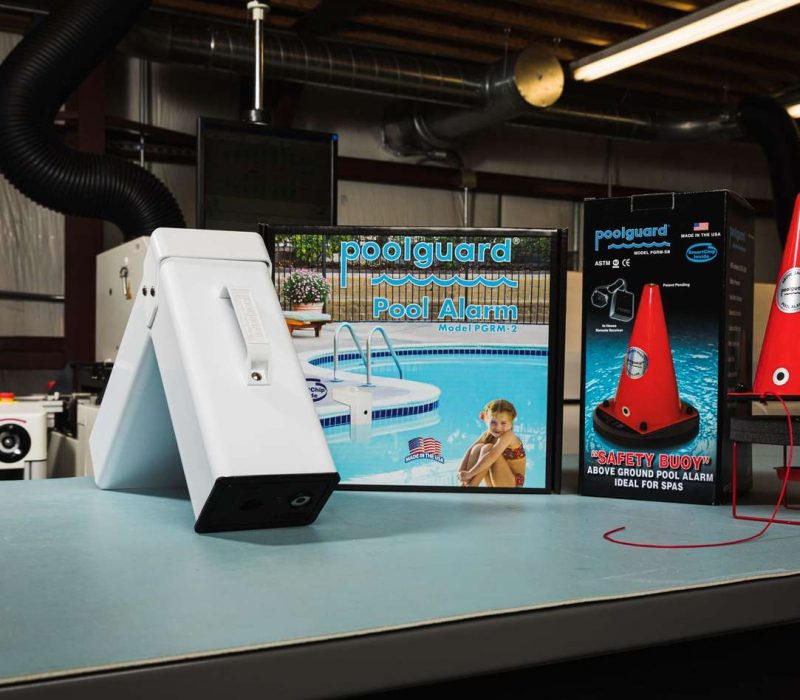 Poolguard (PBM Industries, Inc.) was founded in North Vernon, Ind., in 1982 and is approaching 40 years under the same family-owned and -operated enterprise. The founder is still involved with the company, and his son, Ben Stoner, serves as president, running day-to-day operations with the same small-town Indiana dedication and values. “Our company is based around preventing children from drowning,” Ben said. “Drowning is the second leading cause of death for children under five in the United States. Not everyone realizes that, but it’s a very big issue. Our pool safety products manufactured in our small Indiana town are reaching all over the world.”

The five different alarm products made in Poolguard’s North Vernon plant reflect more than just family- and community-values. The products and the manufacturing process that make them are virtually unchanged since the company first introduced them in 1982. “Essentially it’s like sewing,” explained Ben. “You take an inch-and-a-half long resistor part and put it through the circuit board. The part has to be bent and manipulated to fit in the proper holes in the circuit board. Then it’s folded over on the backside of the circuit board where it’s clipped and soldered in place by hand. We’ve been doing that by hand from the beginning, and we’ve added staff in order to keep up with growing demand.”

The manual process didn’t keep the company from growing though. By 2020, 10 workers were completing 250 circuit boards start to finish each 10-hour day, but 250 boards per day couldn’t keep up with demand. Orders for Poolguard’ products surged as the COVID-19 pandemic forced a new normal, work-from-home. More and more orders added to the already swamped manufacturing team. “We were already busy going into the pandemic, and the pandemic made us even busier,” Ben said. “People were staying home. The pool industry as a whole was on fire, and we were right there with it. We were just really, really far behind and couldn’t keep up with the demand.” 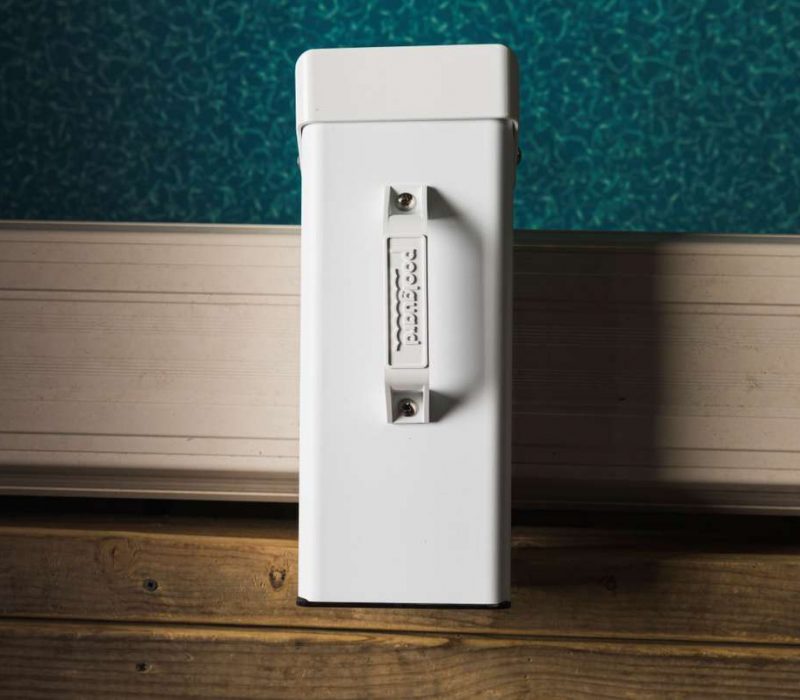 Bryce believes automation is crucial for the company’s continued competitiveness What Ben had learned from other Indiana manufacturers convinced him that surface mount technology provided several advantages. “The parts were very, very small,” he explained, “small enough that you need a pair of tweezers and a magnifying glass to hold it and see what each part is. So parts can be inventoried in a much smaller area.” Additionally, adding a surface mount technology line would automate the entire process from start to finish. “So now we’re able to take a job that used to require ten people, and now it only takes two people,” he said. “And a job that used to produce 250 circuit boards in a 10-hour day with two hours of overtime now produces 150 boards an hour. That increases our production capacity a lot and allows us to take the people who were doing that [manual] job previously and train them in new areas of the company.” Plus, he said, the increased capacity reduces the cost of production and opens new markets.

One key to the successful transition to automated technology was Poolguard’s focus on moving its existing workforce into new positions. Ben acknowledged that people were initially unsure about the process. There was general concern among the team that jobs could be removed when the new equipment was in place. That wasn’t the case. Re-training the existing employees to do different jobs and work directly with the new technologies was a big priority for Poolguard’s leadership. The management team knew the opportunities to work with the automation technology would keep employees excited about working at Poolguard, provide opportunities to learn new skills, and create new positions internally. Leadership eased worker concerns and employees saw that, far from being replaced, they were an important part of the Poolguard future. “People like to see that you’re growing and learning and becoming bigger,” Ben said. “Employees want to feel like they’re part of something cool.”

Automation wasn’t a foreign concept to Poolguard. “We’ve talked about automation over the years,” Ben said. “Anytime in a small business when you’re talking about implementing technology that no one understands, it’s tough to make that leap. But the last couple of years, no matter how many people we added, it seemed we couldn’t keep up with demand. Business just keeps getting better and better.” That was a good thing, he said. “We had to take a strong look last year at what we could do to increase production.” The MRG program was the deciding factor for Poolguard. “That made it a much easier decision,” he said. “It took some of that financial burden from us. Taking away some of the risk was a big help. We were able to get everyone on board and get the equipment ordered, get it in here and start running it.”

“Now we’re just focused on getting this fully implemented,” Ben explained. “We have a few other things in the works as far as streamlining processes to make everything operate smoothly. The grant was crucial to be able to make this happen. It was a great way to springboard into new technology.” 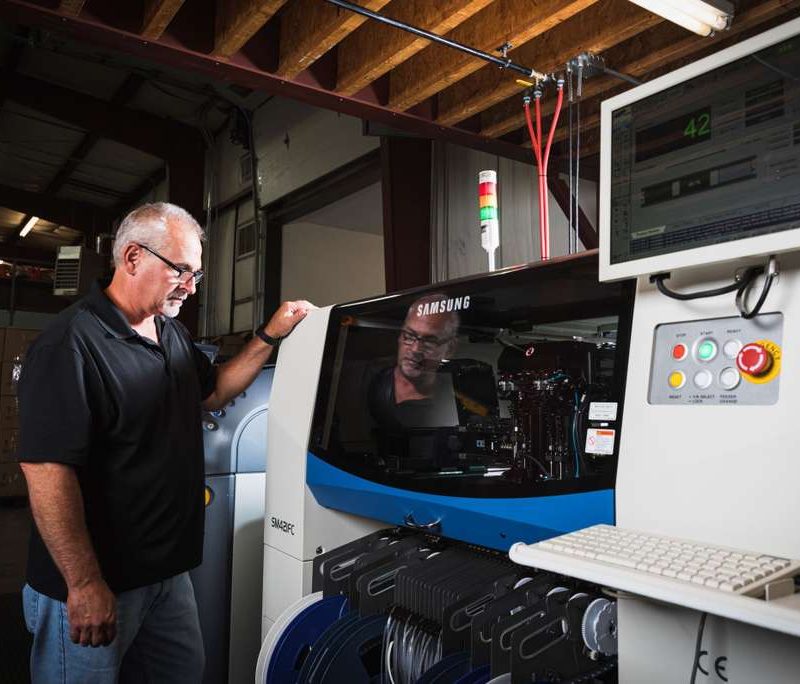 Take Advantage of the Experience of Others, Get Advice on New Technologies, and Lean Into Indiana’s Deep Network of Manufacturing Companies

Ben had researched automation answers to the company’s growing backlog and conducted due diligence to determine which of the available paths would best serve Poolguard’s production requirements. One of the most important parts of that research was seeking advice from a network of Indiana companies that had already implemented similar equipment. Many of those companies generously opened their facilities to allow Ben and his team to tour, see the technology in operation and even shared things they would have done differently now.

It will be necessary to add staff as the business continues to grow. “It’s hard to get enough of the right people in here to be able to meet the demand,” Ben admitted. “But that’s why we’re doing automation, so we’ll be able to take some of the people we already have who work well with everyone and move them into new roles. That will allow us to increase production and utilize this new technology with people already a part of our organization. “They thought we were replacing them,” Ben said of the Poolguard workforce. “We had to ease those concerns and now everyone’s excited about it. There’s a renewed exuberance. People like to see that you’re growing and learning and becoming bigger, and they feel comfortable in their job and feel like they’re part of something cool.”