Albert Chen immigrated from Taiwan in 1968. He studied at Portland State University and just shy of his PhD, started working for GTE, which eventually brought him to Indiana. His decade at GTE helped steer him to a life of entrepreneurship and supply chain enhancement. In 1985, he founded Telamon Corporation in Carmel and remains Executive Chair of the Telamon Board today. The company is the largest privately-held company in Indiana where its headquarters remain and operates in 48 U.S. states and 3 foreign countries—Macedonia, Mexico, and India. Albert and the company’s Chief Executive Officer, Stanley Chen, and Chief Administrative Officer, Stephanie Kim, oversee all operations of the family-owned Telamon business.

The business is split into three branches with distinct focuses, all supporting the advanced manufacturing and logistics industries. Telamon Telecom Solutions assists telecommunications networks from supply chain and distribution services to complex builds including site acquisition, engineering and design to turnkey integration and installations. The Telamon Industrial Solutions arm is responsible for kitting and assembly as well as wire harness manufacturing. And Telamon Enterprise Ventures incubates cutting-edge services in both energy and robotics technologies to drive efficiency and save money. 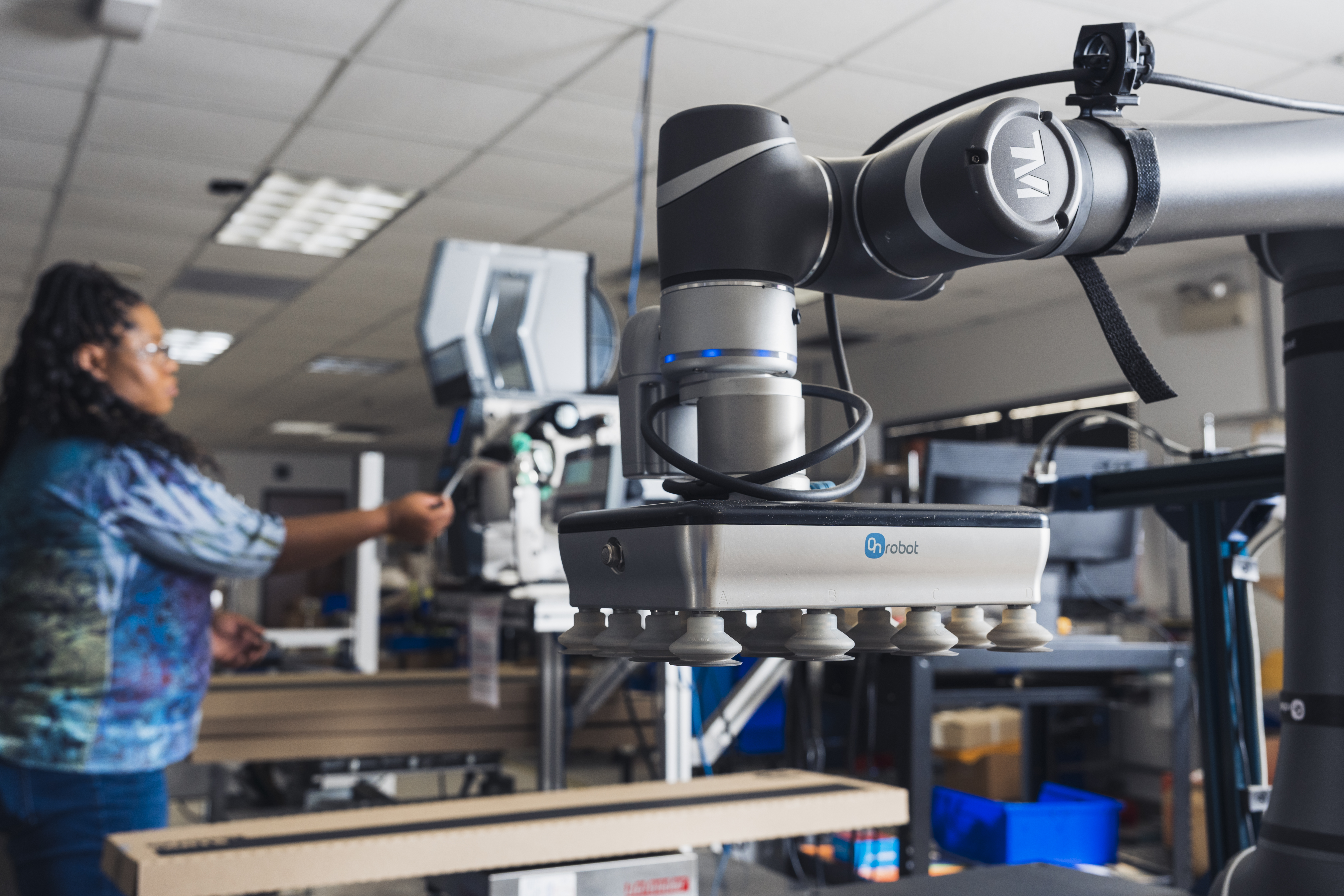 Telamon Industrial Solutions works primarily with large original and reconditioned original equipment manufacturers (OEMs). Most of that work involves assembling ‘kits’ for those OEMs and as Director of Operations DJ Eddy explained, “it was a very manual process, highly operator dependent. As a result, it could be prone to non-conformances with our customer.” Non-conformances, he added, related to having wrong parts in the kit, or wrong quantities of a given part, or missing a part. “We knew for the long-term we had to do something that was different with regards to how we processed kits,” DJ said. A typical kit could contain anything from 3 to 25 parts, and hundreds of different variations. DJ added. “With a low volume-high mix program, the assembly lines need to be flexible.” In our facility, there are no dedicated lines serving only one product or even one customer. In addition, one kit might have only one part different from another. “All of these complexities make a manual system prone to error,” DJ said.

That is where the third arm of Telamon Corporation—Telamon Enterprise Ventures—proved helpful to Industrial Solutions. “The opportunity to adopt collaborative robotics to improve our process was enticing given the level of support we have in-house through the Ventures group,” DJ said. While the assembly process of any one kit is variable, the last steps in the process are consistent. So, to enhance product quality and reduce errors, cobots were deployed at the end of the assembly process with the help of a Manufacturing Readiness Grant award. Telamon’s new cobots are programmed to label, weigh and palletize the kits, removing the need for manual intervention at the end of the process. And if the kit is within predetermined parameters, then the Telamon operators know that all the right parts are included–significantly reducing error and nonconformity notices from customers.

“It’s similar to self-checkout at the grocery,” DJ said. “You scan what you are being charged for and add that same item to the bag. The computer knows the weight of each item, and if the object you add to the bag matches that weight, the assumption is it’s the right object.” 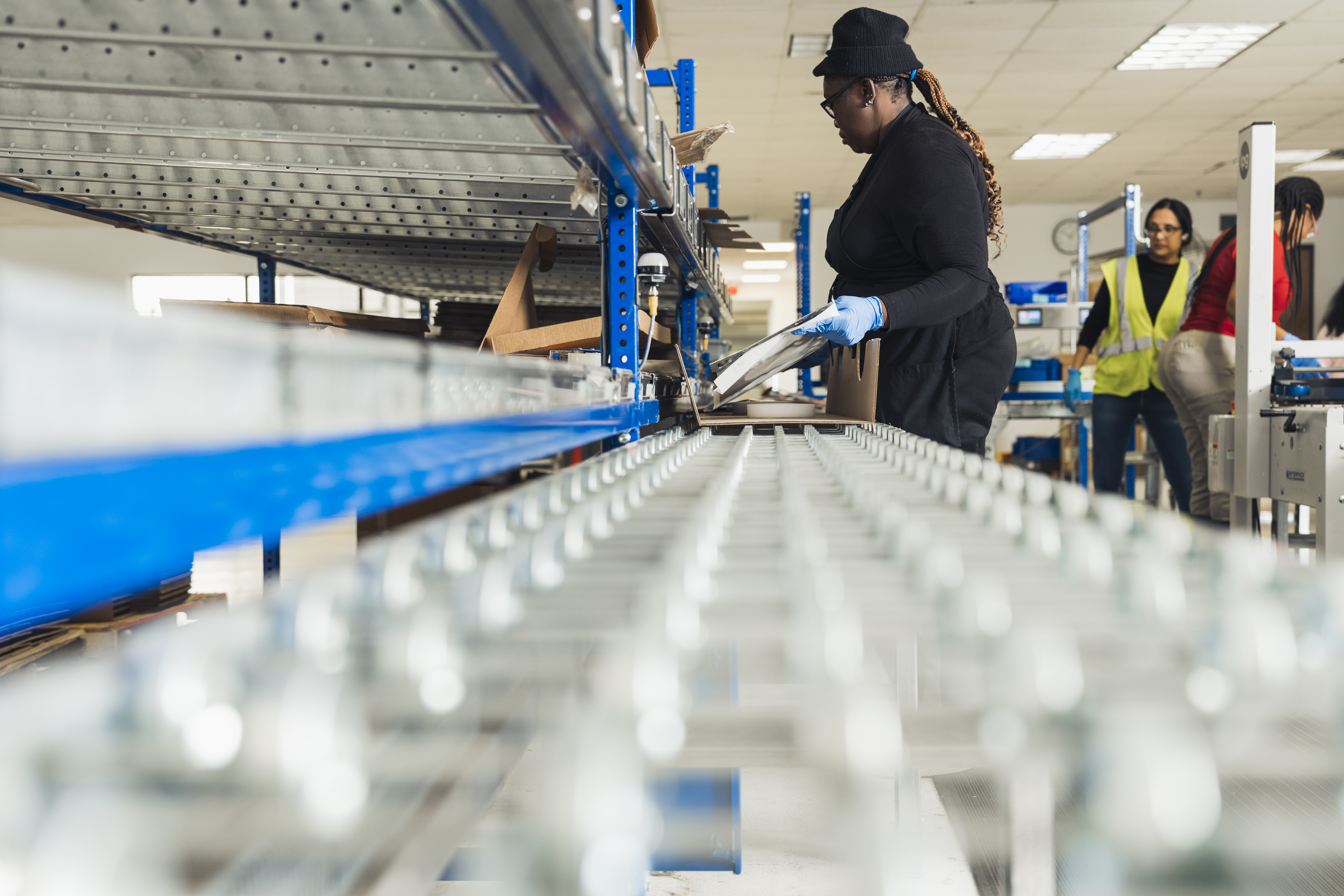 With the cobot project fully implemented and working as planned, Telamon Industrial Solutions is recognizing other opportunities to enhance the kitting process.

With close to 40 years of manufacturing experience, DJ knows there are often unanticipated benefits to new technology adoption, and this project is proving to offer the same opportunities. “We’ve recognized there were opportunities to use the scanning portion of the system to enhance the traceability of the kit components,” he said. “We’re talking with a customer right now about labeling components within the kits themselves enhancing identification and traceability using bar coding” The process could provide each individual part with a unique serial number and place it within a kit that is uniquely serialized as well. With that kind of traceability, any problem that might occur in the field can be traced back to the process to identify its origins and correct any issues. “We see it as a potential value-add to our customers,” DJ said.

Successful execution of a technology adoption project requires buy-in from the workforce.

The culture of the three Telamon divisions is built upon the four values the organization has long held. Those values are reduced to a memorable acronym that is easy to identify and recall: H2S2. Honesty. Harmony. Simplicity. Stewardship. DJ explained that by stressing these values with employees and stakeholders, Telamon sustains its strong relationships with its customers, vendors and the community. “What we needed to communicate to our employees was, in order to do the right things for the customer, we must invest in our existing processes,” he said. “They understood that upfront. And the more they saw this project becoming a success on the shop floor, the more excited they were. It’s very important to engage your workforce early on.” The result, he said, was that employees were curious and eager to become involved and make the project a success. “They were particularly excited when connections were made between our division and the Ventures division as we worked together on the project.”

As the project became more integrated into the assembly process, the company’s workforce understood the automation wasn’t eliminating workers from the production line. Instead, employee productivity was enhanced as cobots perform collaboratively alongside our Team members. “That’s a major selling point, and a very significant aspect,” DJ said. “The robots are called ‘collaborative’ for good reason, but the technology also increases our flexibility on the shop floor. A likely next step for us is to integrate cobots for visual inspection within our assembly process.”

The technology adoption project has been a winning investment for Telamon Industrial Solutions. “We promoted what we were doing with one of our large customers,” DJ said. “We reported the results of the project to our customer, and during the implementation of this new process our compliance score started to improve. Our customer could see the benefits of this investment, and as a result awarded us substantial new business, with annualized revenues in the millions. And that is a direct result of our commitment to improving our processes and quality with Industry 4.0 technologies.”