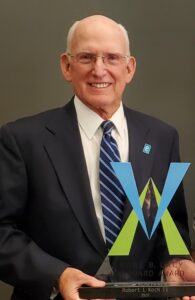 “Conexus Indiana is thrilled to bestow this honor on Bob Koch, a stalwart in Indiana’s advanced manufacturing community for the last 58 years,” said J. Mark Howell, president and CEO of Conexus Indiana. “Not only has Bob expanded his own company into one of the largest privately owned companies in the state, he also has dedicated his life to ensuring members of his community have access to quality education, services and opportunities.”

Bob and Andre were contemporaries, colleagues and shared many similarities in their professional successes as well as in their commitment to community leadership and philanthropy.

“Over the years I have been fortunate to receive a number of awards but this one is really special to me and will be treasured the rest of my life,” Koch said. “Indeed, Andre was a good friend and good source of help and inspiration for me.”

J.A. Lacy, president and CEO of LDI, Ltd. and Andre’s son, added: “Like Bob, Andre presided over a family business during a time of significant expansion and success, championed an uncompromising focus on customer needs and had an interest in education that ran deep. My dad embraced an abundance mentality and believed in giving freely without expectation of return. He was confident a rising tide lifts all boats and endeavored to be a catalyst for action in this regard. Bob shares this philosophy, and I am delighted that he is being celebrated for his leadership, contributions to elevating Indiana’s prominence in the global economy, and his influence on the future of our state.”

Outside of his company work, Koch is passionate about improving education in Indiana. He is founding member and president of the Signature School in Evansville, Indiana’s first public charter high school and regularly ranked one of the best high schools in the United States. He has served on a number of boards dedicated to higher education, Independent Colleges of Indiana and Southern Indiana Higher Education and currently is a Life Trustee at University of Evansville

He has been recognized as a Sagamore of the Wabash by Governors O’Bannon, Daniels and Holcomb. In 2002, he was chosen as the Indiana Business Leader of the Year by the Indiana Chamber of Commerce, then in 2006 was inducted into the Evansville Business Hall of Fame.

Koch is married to Cynthia Ross and they have four children and 10 grandchildren.

For more than a decade, Conexus Indiana, one of the Central Indiana Corporate Partnership (CICP) non-profit initiatives, has been positioning the Hoosier State as the best place for advanced manufacturing and logistics industries to invest, employ and succeed. By collaborating with industry, academic and public sector partners on a shared vision for an innovative, skilled workforce and stronger business climate, Conexus Indiana has helped to create opportunities for advanced manufacturing and logistics companies, prepare Hoosiers to succeed in the state’s largest industry sectors and maintain Indiana’s competitive advantage. For more information, go to www.conexusindiana.com.