Posted in Press Releases by plaidadmin on June 7, 2018 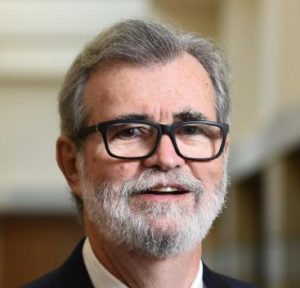 The award, named after local philanthropist and business leader Andre B. Lacy, honors Hoosier leaders who champion the advanced manufacturing and logistics industries, advocate for civic and philanthropic leadership, and demonstrate visionary perspective that challenges the status quo.

“Conexus Indiana is thrilled to honor Joe as the first recipient of the Andre B. Lacy Vanguard Award,” said J. Mark Howell, president and CEO of Conexus Indiana. “Joe embodies the characteristics that Andre lived by and that we are seeking to highlight with this award. His passion for our industries serves as an inspiration for emerging advanced manufacturing and logistics leaders.”

Under his leadership, Cummins Inc., the Columbus, Ind.-based independent diesel engine manufacturer, grew into a Fortune 200 company with over 40,000 employees and more than $14.3 billion in sales. He retired from Cummins in 2009 after a career at the company that spanned more than 35 years, which led to his recognition as one of Indiana’s leading voices on advanced manufacturing.

He previously served as board chairman of the Manufacturing Institute and was a founding chairman of Conexus Indiana, serving from 2007-2012. Loughrey currently serves on a number of boards, including the Vanguard Group, Oxfam America, and The V Foundation for Cancer Research.

An instrumental member of the team that established and grew the Community Education Coalition of Columbus, Indiana and its Southeast Indiana Regional Economic Opportunities through Education (EcO) Network, Loughrey helped direct attention to the advanced manufacturing opportunities available to residents of Southern Indiana.

Named Indiana Global Business Person of 2007, Loughrey was also named a Sagamore of the Wabash by Indiana Gov. Mitch Daniels the following year. He received the Ellis Island Medal of Honor in 2008. In 2009, he was given the John F. Kennedy National Award by the St. Patrick’s Committee of Holyoke, Mass., the William R. Laws Human Rights Award by the Human Rights Commission of Columbus, Ind., and was elected to the Indiana Academy. In 2015, he received an honorary doctorate from Saint Anselm College in New Hampshire for his philanthropy and volunteerism.

Loughrey is a graduate of the University of Notre Dame, where he serves as a member and former chair of the Advisory Council to the College of Arts & Letters and as chair of the Kellogg Institute for International Studies Advisory Board.

For more than a decade, Conexus Indiana, one of the Central Indiana Corporate Partnership (CICP) non-profit initiatives, has been positioning the Hoosier State as the best place for advanced manufacturing and logistics industries to invest, employ and succeed. By collaborating with industry, academic and public sector partners on a shared vision for an innovative, skilled workforce and stronger business climate, Conexus Indiana has helped to create opportunities for advanced manufacturing and logistics companies, prepare Hoosiers to succeed in the state’s largest industry sectors and maintain Indiana’s competitive advantage. For more information, go to www.ConexusIndiana.com.