Tom Easterday: The joy of challenges and the pursuit of excellence 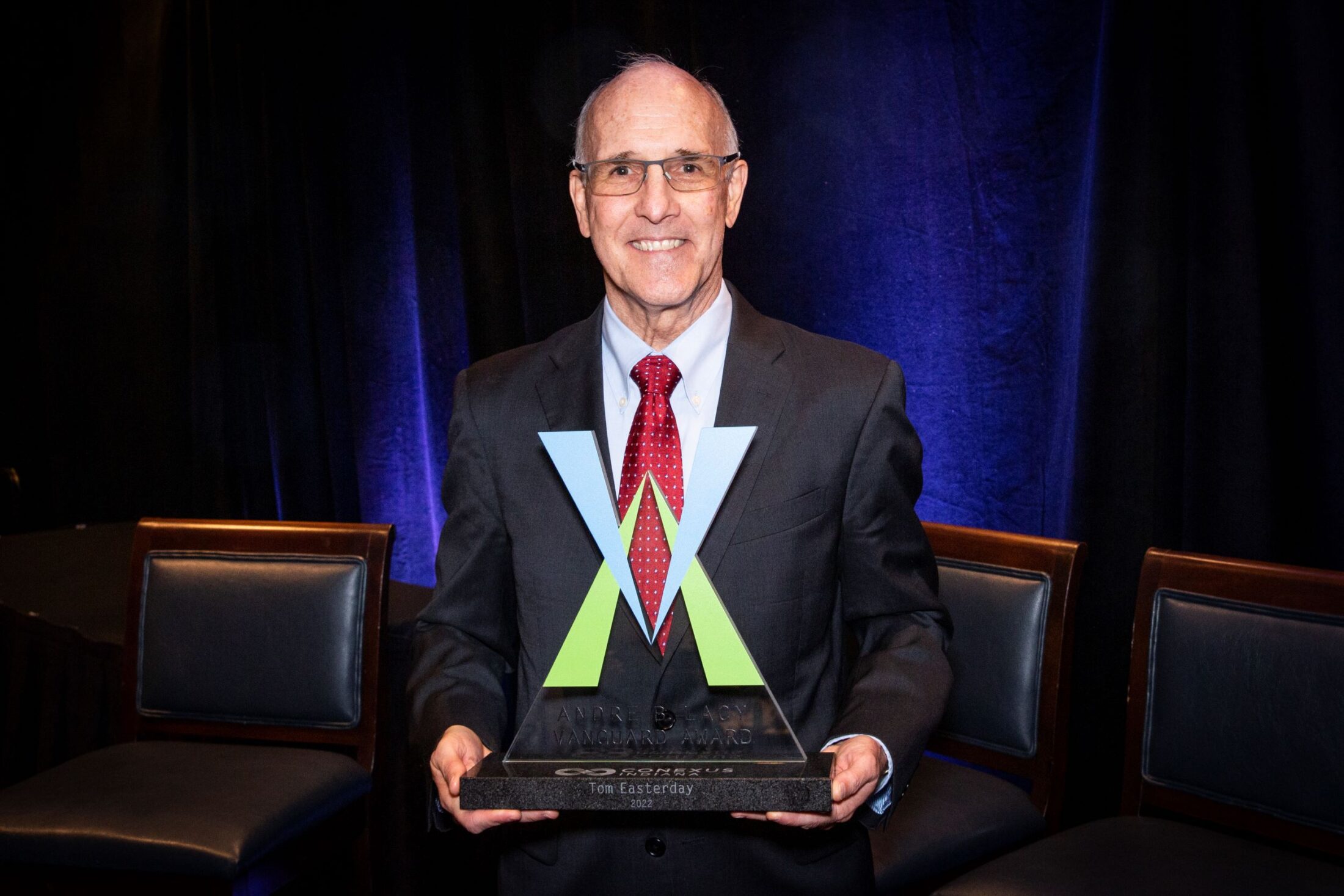 Three decades ago, Tom Easterday took a chance and hired on as legal counsel for an automobile manufacturing firm that was just starting to set up shop in Indiana. By the time he retired from Subaru of Indiana Automotive (SIA) in 2018, he was serving as the firm’s senior executive vice president, secretary and chief legal officer, and had spent two decades as Subaru’s top American employee.

This month, Conexus Indiana named Easterday the 2022 recipient of the Andre B. Lacy Vanguard Award, an honor given to recognize extraordinary leadership and impact. Receiving the award at the May 11 Rising 30 Awards Ceremony, Easterday recently talked with Conexus Indiana about his career, lessons learned and the importance of civic involvement.

You were among the first employees hired by Subaru of Indiana. What was it about the opportunity that attracted you?

When I went there, I went primarily for two reasons.

One was I thought it would be very interesting to experience the blending of cultures – not just Japanese and American cultures, but different corporate cultures from various industries. Since this was a new, start-up organization, we were bringing in people from all kinds of industries, including non-automotive companies.

It’s interesting, because people from different companies and industries sometimes reflect those other corporate cultures in their personalities. For example, sometimes the more aggressive individuals might be from the bigger companies, maybe because they had to be a little more aggressive to move up in those organizations. We also had people from the West Coast and East Coast coming to Indiana. The other interesting time was when Toyota bought a stake in Subaru and we started manufacturing the Camry, which meant we added the Toyota culture with its emphasis on lean manufacturing.

The second reason was I was drawn to the opportunity to be at the start or beginning of a company that I hoped would grow into a very major player in Indiana and maybe in the country. I looked at that and said, “What a unique opportunity to be able to start the legal compliance program, to do it right from the beginning.”

Some people would avoid challenges like those, but you are attracted to them. Why?

Life would be pretty boring if you didn’t have challenges. Early on at SIA, for example, we had some struggles. At one point, the company had a huge inventory, and then they came out with the Outback, which was supposed to sell 500 a month and within a couple of years sold 5,000 a month. It was a tough time, but it was exciting.

Taking on challenges reflects another thing I often talk about, which is striving for excellence in everything you do. If you’re going to be a leader, you should always strive for excellence, even when facing big challenges. Life’s too short not to do your best.

That kind of goes back to kaizen or continuous improvement. It applies to a person as well as an organization. You should strive to continuously improve yourself, and that doesn’t necessarily mean going out and making more money.

You feel strongly that a company’s true purpose isn’t to make a profit. What is it?

Giving back to the community, the state and the country really is the most important thing that a company can do by itself and through its associates. That’s always the first thing I tell people, and usually it surprises them a little bit. They often think, “First you make a profit,” and that is important for the company to survive and thrive, but giving back should always be a company’s true purpose.

That includes volunteerism. I tell young leaders that they should strive to be involved in community organizations so they can take their leadership skills into the civic world. Organizations need that kind of leadership experience and business expertise.

That’s why I advise young leaders to always strive for excellence in everything they do. You are going to be looked upon to set an example. If you give a half effort it’s going to say to others that that half effort is OK, and that also applies to your work in charitable activities. Don’t just join them for something on your resume. Do your best for them.

You also say the interests of associates should always be top-of-mind.

Business leaders should always weigh the interests of production and the interests of their associates as equally as possible. That can seem a little confusing, because people think you do only what’s best to improve production, but there’s no production without your associates, and your quality is going tosuffer if you don’t have satisfied associates.

Also, if an associate wants to talk to you, for that moment, whatever matters to that associate should be the most important thing that matters to you.

The fact is, I never built a single car; the associates did. In many respects, they were more important to the company than I was.

You’re one of the founders of ILADD (Independent Living for Adults with Developmental/Intellectual Disabilities).  How did that come about?

I have a son with Fragile X Syndrome, and my wife, Deb, and I have coached Special Olympics for over 20 years. About six or seven years ago, we had this athlete, Justin, a big guy in his 30s, and Justin’s grandpa would bring him to practice. Grandpa had raised Justin, and he was probably in his mid-70s.

One day someone else brought Justin to practice, and I noticed Justin wasn’t himself. He was crying, which was really unusual. We asked Justin what’s wrong, and he said, “Grandpa’s really sick, and he’s going to die.” Then I asked, “Well, what’s going to happen to you?” and he said, “They say I’m going to go into a group home on the south side of Indianapolis.”

So, here poor Justin, after 30-plus years of his life and having his group of friends in Lebanon and Boone County, he’s going to be taken away from them and put into a home with people he didn’t know on the south side of Indianapolis. With people like Justin, the community knows them and loves them. And we thought adults in his situation shouldn’t have to be taken out of that community. They should have the opportunity to live independently in the community of their choice.

So, a group of families got together and decided to create an organization that would help adults like Justin. We picked people with particular backgrounds to be on the board, committees and advisory council, so that we could utilize their expertise, skills and experience. That’s how we got started, and we have done pretty well so far. We’re still working through the process to acquire land for housing, but we did get some land that will be used for a training center. Right now we’re serving about 70 adults with intellectual or developmental disabilities through ILADD’s enrichment/educational programs, independent living skills classes and social options.

What does earning the Andre B. Lacy Vanguard Award mean to you?

It means a lot, because I would count Andre as one of the four people I always looked up to and whose career I tried to emulate. He was a business leader that exemplified leadership and personal improvement, on the civic level, personal level and in the business community. He did so much for his community, setting that example, getting personally involved, and striving to do his best. I’m honored to be associated with him in this way.