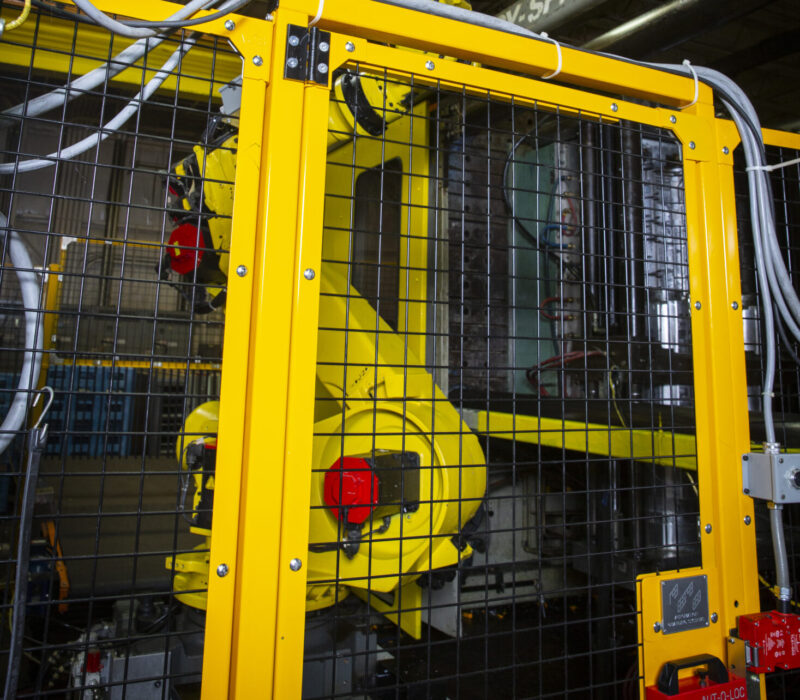 Poised for Growth: DeKalb Expands Investments in Automation and Tech.

DeKalb Molded Plastics has been at home in Butler, Indiana, since it was founded more than 40 years ago. The small city in northeastern Indiana sits at the intersection of US Highway 6 and State Road 1, just 9 miles east of Interstate 69, which from the Canadian Border at Port Huron, Michigan, will eventually stretch to the Texas border with Mexico making it a major north-south route for commercial traffic.

DeKalb is a custom structural foam molder, specializing in large, multi-nozzle plastic products for the medical, safety, and transportation and material handling industries.  DeKalb can often bring value to customers by converting their metal, wooden, or concrete products to structural foam plastic.  Poised for growth, DeKalb has increased revenues from $12 million in 2010 to as much as $20 million in 2021, and they’ve managed it with just 50 employees and a commitment to automation technology that’s helping them grow and innovate.

Technical Project Manager Mike Campbell said that growth is no accident. “We work hard on business development,” he explained. “We really go out and beat the pavement for new conversion into plastic. We can make anywhere from a two-pound part clear up to an 80- to 100-pound part. It’s heavy-duty, large-scale stuff.” 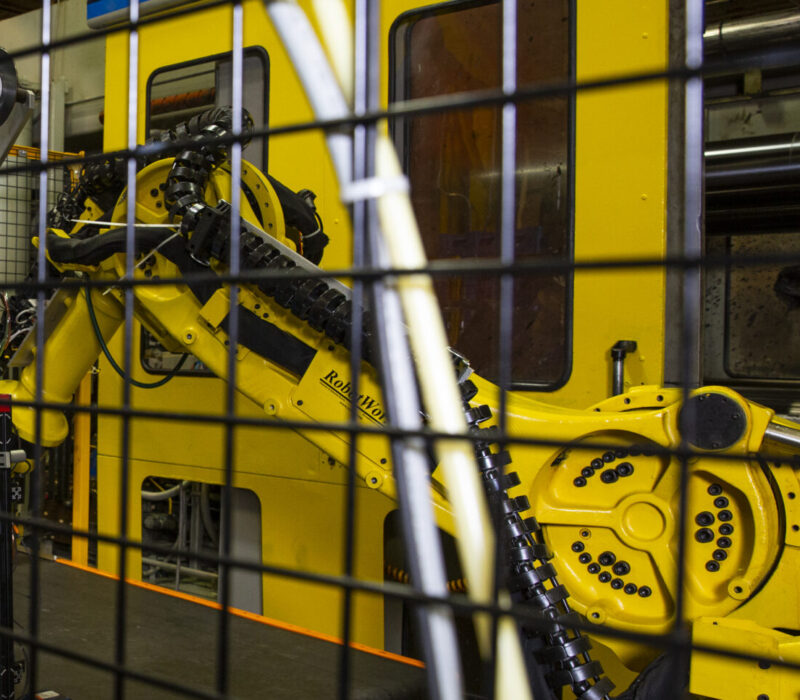 Using regular injection molding machines has been standard operating procedure in the molding process. But these machines can be intimidating for employees to handle because they mold very large parts. With a growing focus on workforce safety and efficiency, DeKalb installed a new industrial robot to limit the operators’ direct interaction with the molding machine. “Workers would sometimes struggle to physically wrangle the part onto a table where further work on the part can continue,” Mike said. “The robotic cell assures limited handling of the part by the employee, and can pull the part out when the mold is released by the machine in a precise, measured and controlled way.”

The efficiency benefits are huge, too. “The robot actually goes into the machine, gets the part and brings it to the conveyor, which brings it to the employee,” Mike said. Since parts can range up to 60 pounds or more, and since the company forbids employees from lifting any part greater than 30 pounds, the benefits to workplace and employee safety are obvious. Adding the industrial robot eliminates the need for a worker to pick the part up off the floor. Mike continued, “The robots have improved our safety and efficiency as we no longer have to worry about getting the part to the table to finish processing. The feedback we have received from our operators has been, when are you going to add more robots?”

Collaborative Robots: A Natural Next Step in DeKalb’s Technology Roadmap.

Mike is already thinking ahead to the next technological step to improve employees’ jobs and increase customer service. “We’re seeing our next investment as incorporating cobots to create a more collaborative environment,” Mike shared. He believes cobots, or “collaborative robots” are the next step in industrial technology. Designed to work alongside the employee, rather than as a separate part of the automation process, cobots use sensors and similar adaptations to allow them to work with the employee as part of a team. They also provide more flexibility; because they typically are smaller and weigh less than other industrial robots, cobots are easy to move to different production areas as needed. 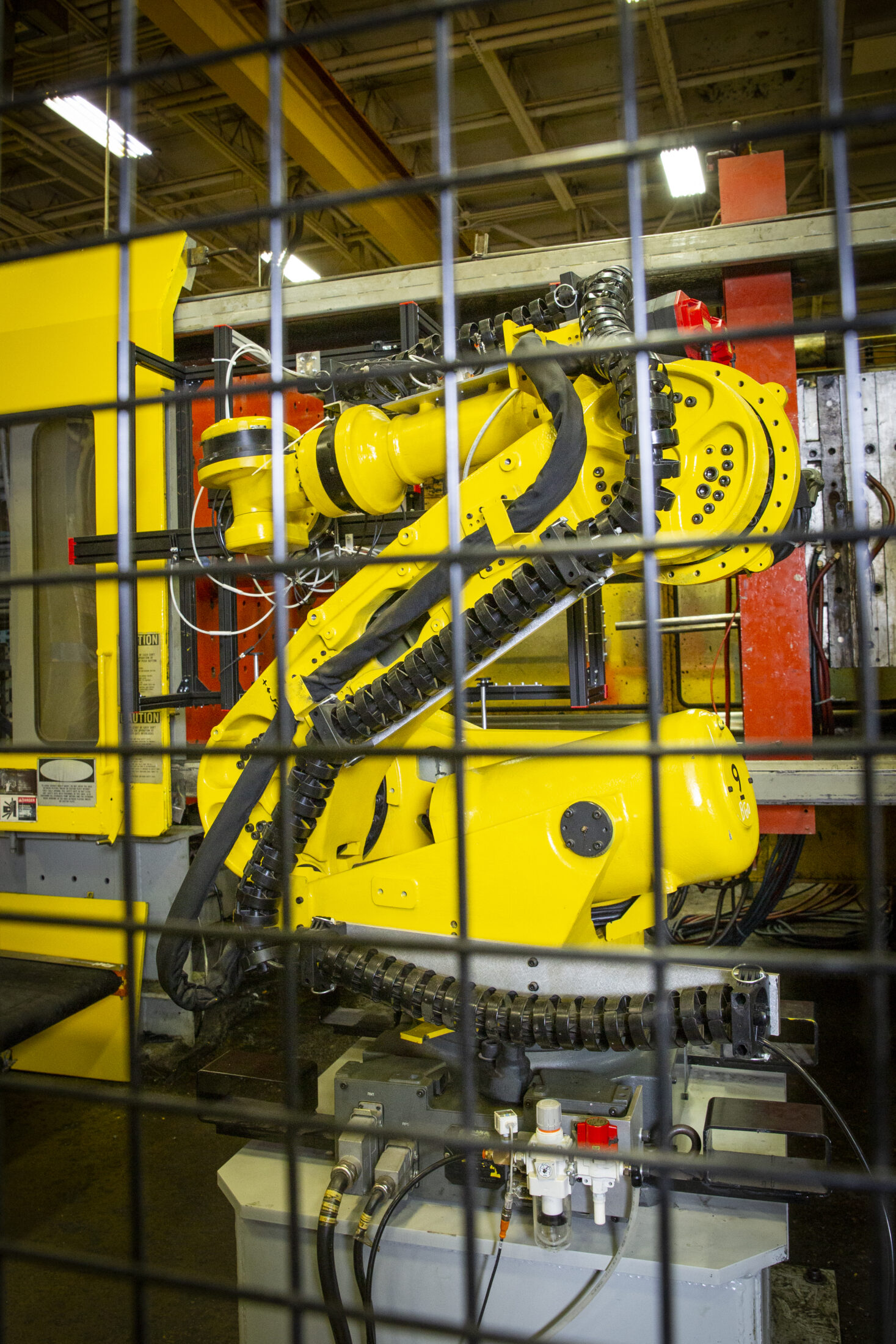 Mike remembers when DeKalb had just one robot back in 2010, and that single robot served only one of the nine injection molding machines. Today, five robots are serving nine machines, and the company is following its established roadmap to a future with full robotics on all machines. But as with most smart manufacturing projects within the MRG program, the implications for the workforce are not primarily staff reductions, but staff re-training. The commitment to technology advancement has been steady, and preparing the workforce for the new automated environment is essential to DeKalb’s success.

“In the beginning, not a single person inside the plant besides me could work with robotics,” Mike recalled. “And I wasn’t a programmer.” Every time a robot needed a new program – sometimes five times a year – the company farmed out close to $2,000 in programming fees. A process technician was recruited to attend Ivy Tech in nearby Fort Wayne. He’s already programmed at least seven robotic jobs and his training has paid for itself. Now two more employees are training to upskill into robot programming. One employee has been with DeKalb for 38 of the company’s 40-year history, and now is in the training queue for automation work.

“There are a lot of different training opportunities,” Mike said, “and all employees have opportunities to learn to work with the technologies. We’re aiming for internal job creation. An operator may become a maintenance person and then a process engineer.”

Robotic Automation Brings the Work to the Workforce and Strengthens Company Culture.

“The janitor is just as important – if not more important – than the president,” is a refrain Mike repeats often, and he demonstrates it by concentrating on making each employee’s job as safe, efficient and ergonomic as possible. “In the past three years, a primary goal at DeKalb has been to keep employees within a five-foot radius of their jobs. Automation and conveyors have made it attainable. The worker no longer goes to the job; the conveyor brings the job to the worker, and the workers enjoy the reduced walking and more efficient use of their time. “

A workplace culture that prioritizes making the work easier for employees benefits not just the employees, but the customers and the company as well. “In our world, 30 seconds faster is two more parts an hour,” Mike said. “That means we can provide our customers with better service.”

A Technology Roadmap Can Help Prioritize Investment in Technology and Support Employee Success.

Mike is a firm believer: The easier you can make the work for your employees, the stronger the company culture becomes. “You know, they want to take care of things. They want to succeed and to help the company succeed,” he said. “Having a roadmap for investment in automation technology is an important part of that.” Being prepared for contingencies is also an important part. When the opportunity for the MRG presented, Mike saw it as the chance to go a little bit further and faster. But there’s still more to do.

“When you don’t have a PLC (programmable logic computer) to talk to the robot, you have to integrate the machines to speak to the robot themselves,” he explained. He’s currently working to determine which of the four machines he wants to advance next. He described the process as, “you have to upgrade the relay logic – the PLC – before you can put the robotic cell in place.” It’s a process he’s accomplished before, but he doesn’t consider it the ideal solution. “My goal would be not to do it, because I want all of our machines that have automation to have a robot,” he said.

Looking back, Mike is satisfied with how the company utilized the successful MRG application. In fact, he says the only thing he would have done differently is bring in the press manufacturer and the robot controls people to talk face to face and help the process move a little more quickly.

He considers the outpouring of positive responses from the DeKalb workforce, though, to be an unabashed success – “Just tremendous,” he said. He referred to the company’s “profit sharing” meetings held with employees each month. “We talk about safety, all the projects, discuss the financials and, in the end, we have a ‘tell me something good’ time, where employees are encouraged to discuss what they’ve experienced in the last month. Out of four meetings in a day, there have been at least 15 to 20 comments thanking me for making automation a priority,” Mike said. “It helps them succeed, which helps DeKalb succeed.”